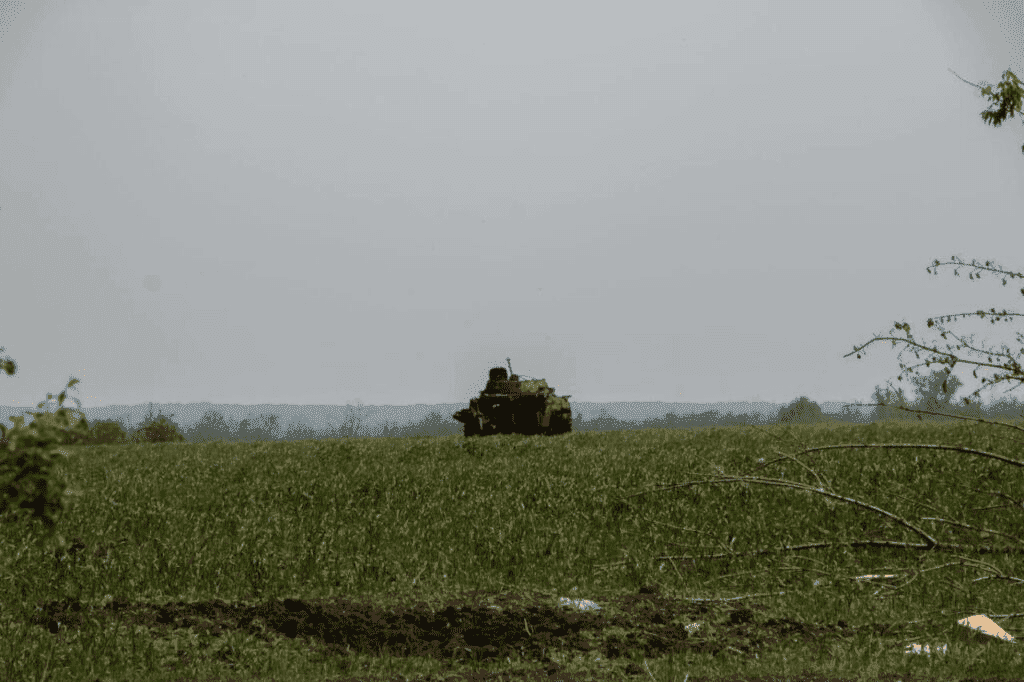 A destroyed military vehicle of Kyiv’s forces​
The days of May 20 and May 21 gave an important lesson to NATO and MSM war propagandists. Regardless your media successes and the dominance of MSM narratives on the international scene, the reality will always prevail.

The Ukrainian leadership and its foreign backers still try to paint that the collapse of the defense of the surrounded grouping of Kyiv’s forces (mainly consisting of various radicals) in Mariupol as some kind of ‘victory’. However, the reality is clear. As of May 21, over 4,500 members of Kyiv’s forces have surrounded in Mariupol. Over 2,400 of them, including members of the infamous neo-Nazi formation ‘Azov’, did this in the Azovstal plant area. Around 1,700 others surrounded in the area of Illich plant. Many others were taken captive in the area of the city and its countryside.

The fall of the Azovstal on May 20 marked the full liberation of Mariupol city and became a major blow to the grouping of Kyiv’s forces remaining in the region of the Donbass. Azov and allied radical formations were among the key and foremost recipients of foreign military aid and were involved in ‘NATO training missions’. An important part of NATO-trained radical formations that appeared in Ukraine in the previous years was neutralized.

According to reports, the ‘Mariupol grouping’ of Kyiv’s forces was approximately 10,000-15,000 troops. This grouping was just officially defeated. 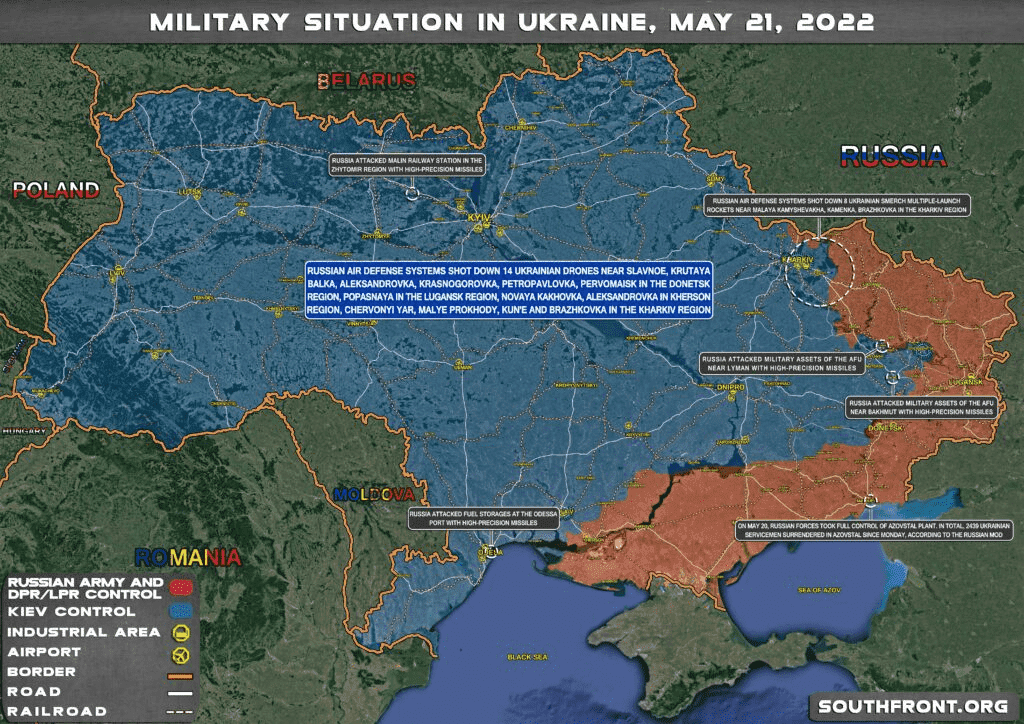 On top of this, the Azov Sea just became the internal sea for Russian forces and their allies. There are no more Kyiv’s troops on the bank of the Azov Sea.

As of May 21, Russian forces and their allies from the Donetsk People’s Republic have been conducing an active security and demining operation in the Mariupol area.

Meanwhile, Russian-led forces have been developing momentum on the other important part of the frontline – in the area of the Severodonetsk-Lysichansk agglomeration, and to the east of it, south of Isum.

After taking control of Popasnaya town, south of Lysichansk, Russian and allied units expanded their foothold there capturing several nearby settlements. As of the evening of May 21, Russian-led forces reached Nirkovo and Vrybovka as well as established a fire control over the highway between Bahmut and Lysichansk.

The fighting is ongoing near the towns of Liman and Seversk. The Russian military uses its foothold in Yampol to control the highway between these towns.

The military situation to the south of Isum could be described as the prolonged positional battles amid the slow Russian advance in the area.

Summing up the developments in the aforementioned locations in the previous days, it is possible to conclude that the Russian military and its allies achieved an important progress. However, Kyiv’s forces will still be able to slow down the Russian advance in Seversk, Slovyansk, Kramatorks and Bahmut despite their setbacks around Popasnaya and Lysichansk. 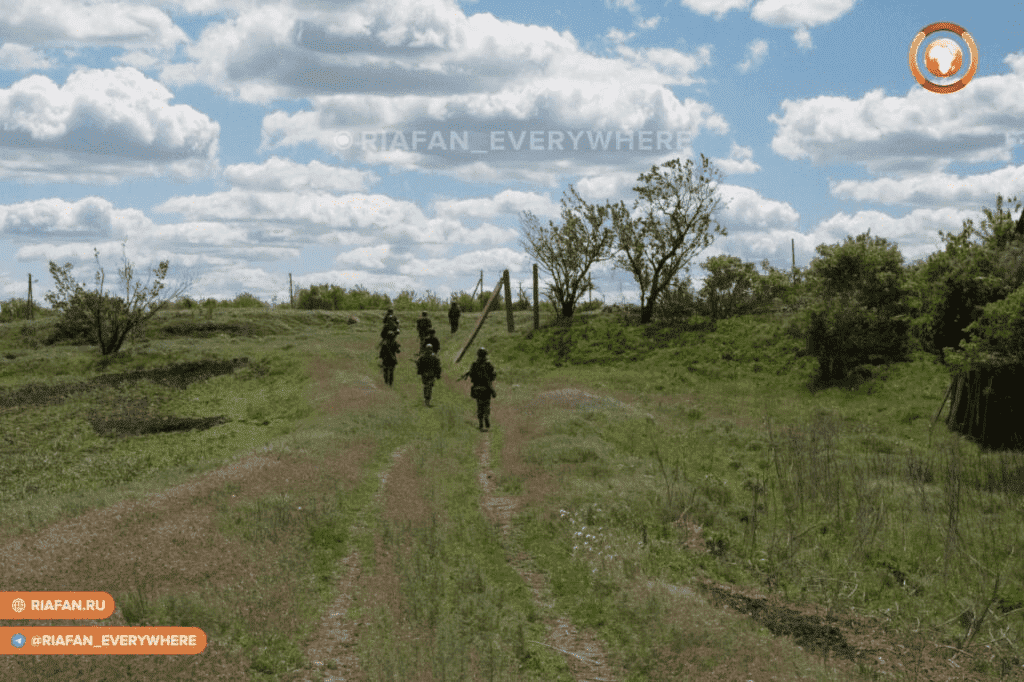 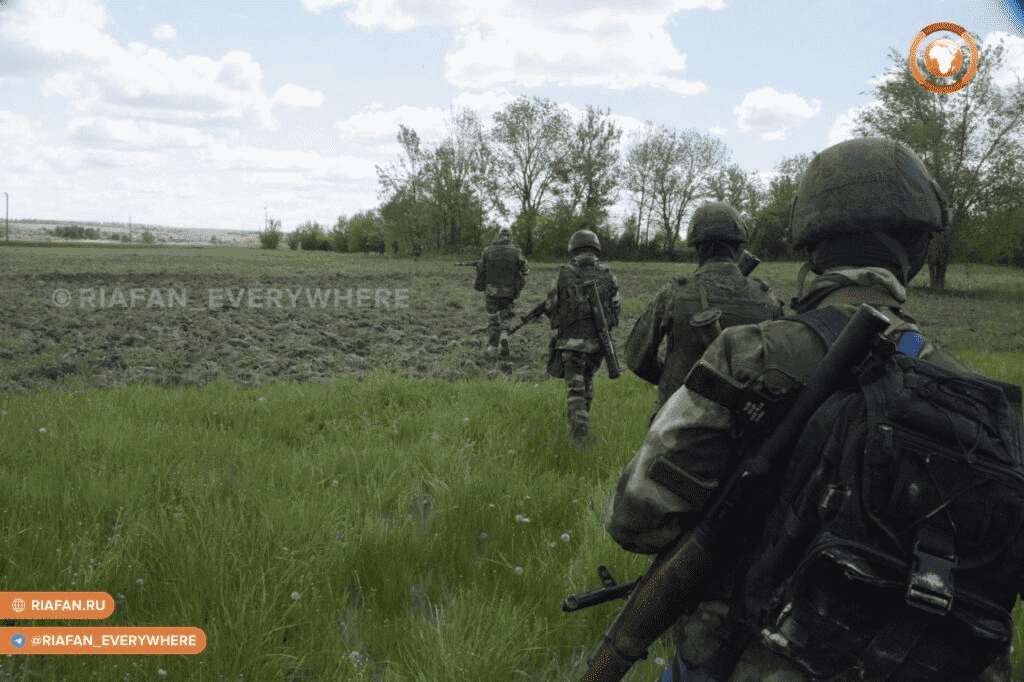 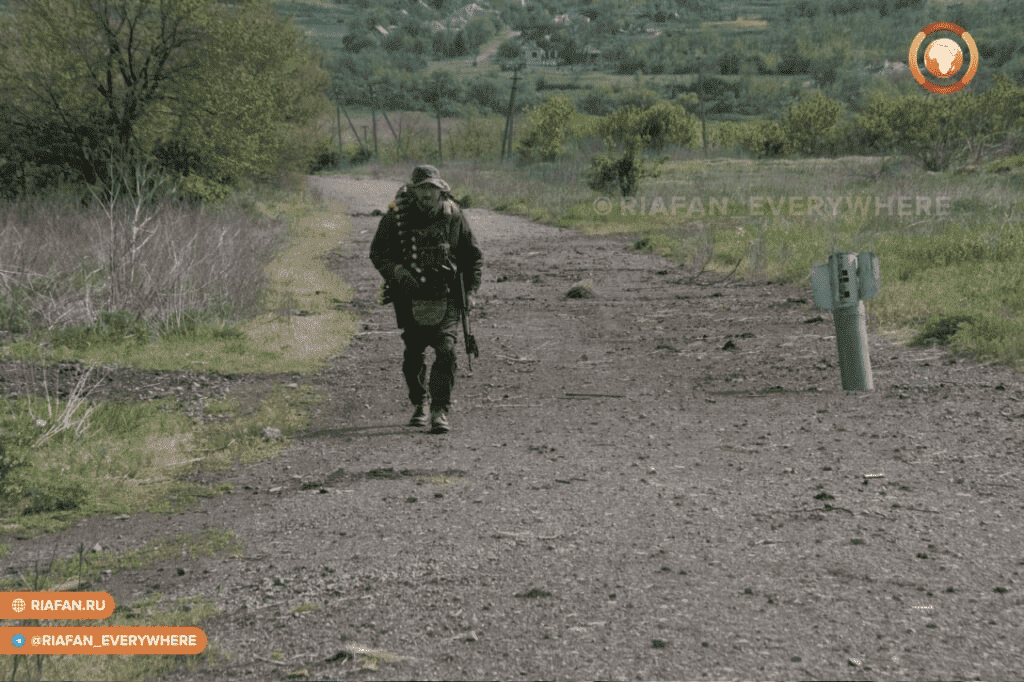 The situation around Kharkiv city remains relatively stable with the Russian Armed Forces and Kyiv’s units involved in positional fighting with no major offensive oeprations.

The frontline also stabilized around Mykolaiv city (Mykolaiv Region) and Zaporizhzhia city (Zaporizhzhia region) in the south of Ukraine.

Most likely the active military operations there will start not earlier than the full liberation of Slovyansk and Kramatorks by Russian forces.

Earlier on May 21, the Russian Defense Ministry released another official report on its ongoing operation in Ukraine.

According to the statement, a strike with sea-based Kalibr cruise missiles destroyed a large batch of weapons and military equipment delivered from the USA and European countries near the Malin railway station in Zhytomir Region.

At the same time, a strike with air-based missiles destroyed fuel storages intended for armoured vehicles of Kyiv’s forces in the area of Odessa, at the Odessa Port Plant.

Additionally, Russian missiles struck 3 command posts, including the command post of the 109th Territorial Defence Brigade near Bakhmut, 36 areas of AFU manpower and military equipment concentration, as well as 8 ammunition depots in Galitsinovo, Nikolaev Region, Nyrkovo in the Lugansk People’s Republic, Krasnyi Liman and Ocheretino in the Donetsk People’s Republic.

The strikes eliminated more than 270 members of Kyiv’s forces and up to 52 armoured and motor vehicles.

The Russian military said that a Ukrainian Su-25 warplane was shot down by a Russian fighter aircraft during an aerial battle near Belitskoe, Donetsk Region.

Another Su-25 aircraft of the Ukrainian Air Force was downed by Russian air defence means near Novoaleksandrovka, Kherson Region. 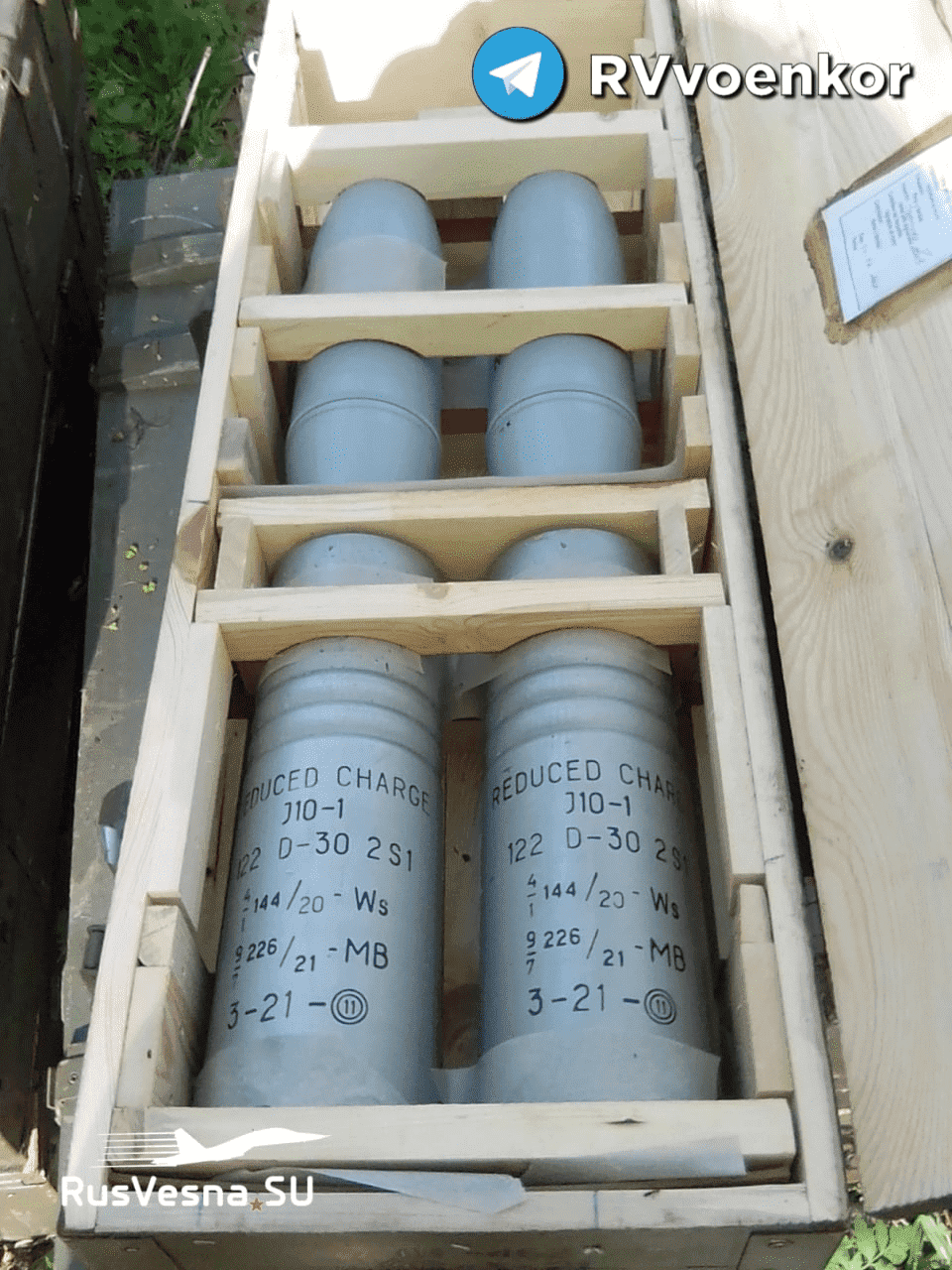 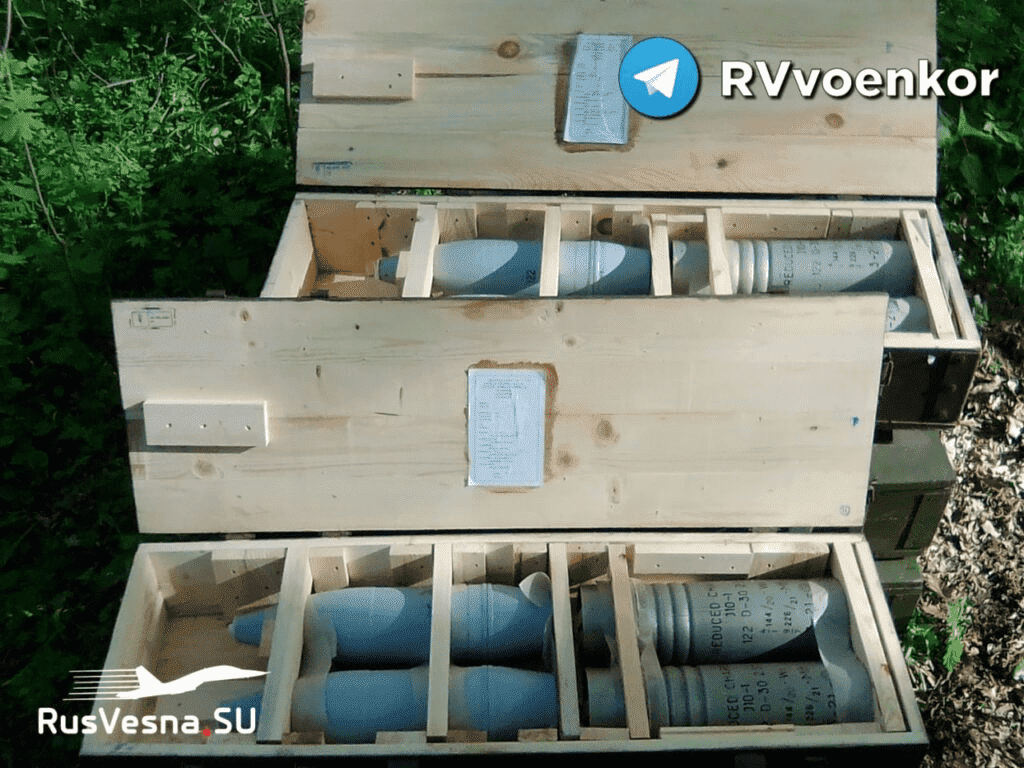 In addition, 8 Ukrainian Smerch multiple-launch rockets have been shot down near Malaya Kamyshevakha, Kamenka, Brazhkovka in Kharkov Region and Chernobaevka in Kherson Region.

The Russian side says that since the start of the operation its forces have destroyed 174 Ukrainian aircraft and 125 helicopters, 966 unmanned aerial vehicles, 315 anti-aircraft missile systems, 3,182 tanks and other armored combat vehicles, 402 multiple launch rocket systems, 1,614 field artillery and mortars, as well as 3,054 units of special military vehicles.

In general, developments of the second half of May demonstrated an obvious fact that in the case of the Russian determination to carry out active military actions instead of diplomatic bargaining, Kyiv’s forces have little chances on the battleground. Therefore, the only hope of the Ukrainian leadership to buy some time is to initiate some kind of ‘complex negotiations’. There are little doubts that if such negotiations start soon, Kyiv will once again sabotage the real agenda of this negotiations and just use this diplomatic platform for own propaganda purposes.