The extensive RPG, with 20+ hours of gameplay, is now available!
Save the Earth from its end!

The main character, Lidim, works in a weapon shop in the capital of Alfria.
He accidentally overhears secret negotiations between two countries.
As Alfria doesn’t agree to become a colony of the powerful Epsilom Empire, an envoy of Epsilom, who is also a witch, uses an unknown weapon to destroy Lidim’s home village as a demonstration of power.
Witnessing the tragedy, Lidim loses his temper and assaults an important figure from the Empire…

■Rather than using leveling system based on classes, characters in this game gain in strength and attributes after each enemy encounter.
If a character relies mainly on weapons to fight, her physical attacks will increase in strength and the character will closely resemble a warrior archetype. Extensive use of elemental attacks, on the other hand, is a straight road to increased mental power and a mage archetype.
■Main characters possess a special power called Barla, usable through Esoterica of Barla. This special skill will be invoked only in the most dire of circumstances, e.g. when the entire party is about to get wiped out. Barla can (and will) turn the tides in the party’s favor. So have some faith in them heroes. Things may turn out better than you’d hoped!
■Featuring various side quests, completing which will yield you rare and powerful artifacts.
Also, the world includes some ruins. Try and explore them, if you are up for an extra challenge. There are many other things to do, including fighting in the arena and completing items and enemies guides.
■At the point shop, you will find a variety of scenarios which reveal more of the character backgrounds, additional dungeons, and powerful items for your adventure pleasure.
In the additional dungeons, the strength of the enemies is adjusted to the strength of your party, so challenging battles can be enjoyed every time you play.
*While IAP content requires additional fees, by no means it is necessary for finishing the game.[Supported OS]
- 2.2, 2.3, 3.1, 3.2, 4.0, 4.1, 4.2
[Supported Screens]
- HVGA (320×480) and up
[Xperia(TM) PLAY]
- Optimized.
[SD Card Storage]
- Enabled
[Languages]
- Japanese, English
[Non-Supported Devices]
- HT-03A(OS1.6), Xperia(OS1.6), Xperia(OS2.1), LYNX(OS1.6), LYNX 3D(OS2.1), REGZA Phone(OS2.1), IS01(OS1.6), IS03(OS2.1), IS04(OS2.1), 003Z(OS2.2), S31HW(OS2.2), Aria(OS2.2)
（This app has generally been tested to work on any mobile device released in Japan. We cannot guarantee support on other devices.） 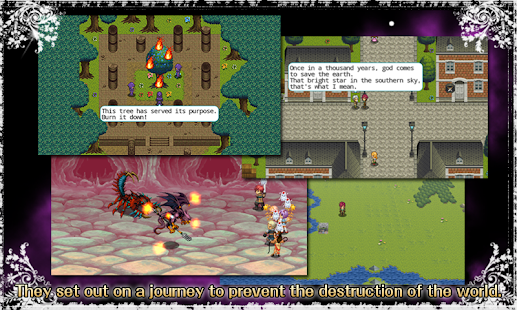 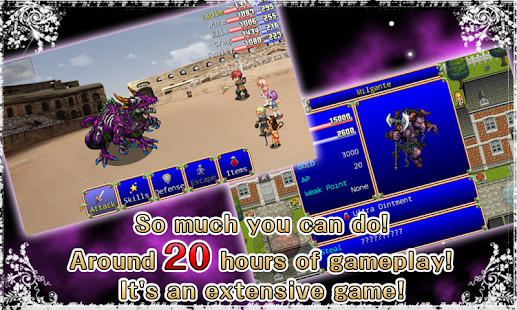 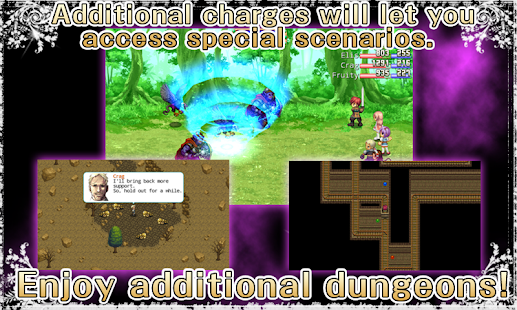