Stories The Apple of Discørd 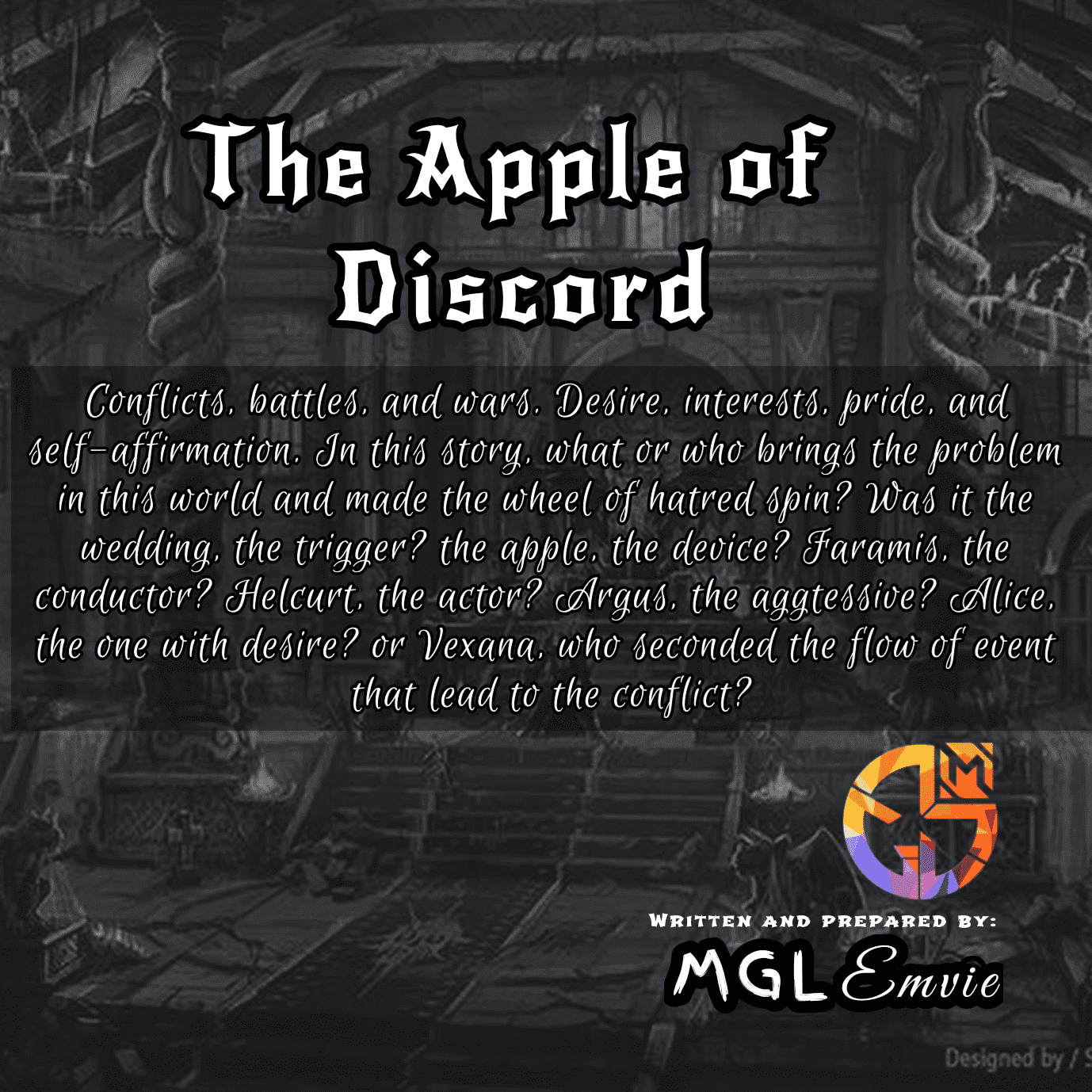 The Apple of Discørd
MGL Emvie
​
A wedding was held in Necrokeep. The Abyss grows in power by the day in the east, and Queen Vexana felt threatened. She decided to expand her power and clutches of the Barren Land to the west. So she had Leomord marry the princess of Crow Clan, Pharsa.
Pharsa refused at first. But the threats of Necrokeep and terror of the Abyss forced her to agree.
Prominent individuals in the land of despair were invited. Among them were Argus, Thamuz, Terizla, and Grock. They gathered in the huge throne room of Necrokeep. It's so massive that the lights from the candles and torches on the round pillars couldn't reach the edges of the room. The reflection of the lights from the a couple dozens of chandeliers only adds up the eeriness of the room. At the dining table in the middle of the throne room, Thamuz tapped Terizla in the arms and said, "The orc is with Alice."
"Careful!" Terizla said as he almost spilled his cup. "The orc, yes. The necromancer seemed anxious about their absence."
"But we're here." Thamuz said as he grabbed his cup. "Let's fill our veins with *******. It's their loss."
"I never knew. Diplomatic mission is a thing among the demons." Terizla smirked.
On an elevated stage near the throne, the newlyweds sat with their own table and space. Faramis, dark and smoldering black, dashed over to raise a cup.
"...to Leomord and Pharsa! To this great evening!" he said.
His cheers receive an awkward silence until Vexana stood. She turned her cup over the servant near her and exclaimed.
"...to the newlyweds!" she said.
The guests stood in response and raised their overflowing cups, "...to the newlyweds!" they said.
A huge door in the side of the room that leads to a narrow corridor opened, and carts filled with different dishes lined up. The candlesticks were increased in the tables of the guests and barrels of wines were rolled over. A pianist and a violinist came over the opposite side of the newlyweds table, adjacent to the throne, and a group of undead choir appeared behind the courtain of the balcony above the musicians. The surprise replaced the simple silence and minimalist vibe of the wedding. But in the midst of an inspiring music that could be described having the same texture as Aida March, a murderous aura emanated at the back, deep under the shadows. The aura would disappear at a time and reappeared nearer.
Thamuz grabbed his sickle and Terizla pulled his hammer. However, a disappointed tone echoed, "You left me!"
Thamuz pointed his sickle at the shadow figure but from the shadows, an obsidian apple appeared flying to their table.
Grock extended his arm to catch the apple.
"Helcurt!" Thamuz exclaimed.
Grock looked at the apple and realized the sparkling letters inscribed on it.
"To the manlier warrior."
"How's the apple? Despite how you look, you have gentle hands" "That is a gift." Helcurt said.
Argus raised his hands to Grock. "As inscribed, it's mine. I am the manliest warrior present. I am an angel." he said.
"A fallen angel to be precise." retorted Terizla. "As a blacksmith, I am a man of perfection and creation while the two of you are forces that brings destruction. I am the manliest warrior."
Thamuz knocked his sickle on the table and stomped the ground. "Don't you think the legion commander of the Abyss is manly enough?"
Grock cleared his throat, and invited the eyes of the three.
"Apple?" he sounded, offering the obsidian apple. He simply didn't had the intention to join in.
The tension got worse so Faramis stood and called the guests.
"I believe, the wits of the Blood Queen can answer the dilemma. I suggest, visit her and receive the answer." Faramis said
"A wise judgement." Vexana seconded.
Faramis's proposition effectively dismissed the entire Abyss leaders in the wedding except for the uninvited Helcurt.
The three rushed to Alice.
"Your business?" Alice asked.
"Here's an obsidian apple, which the manliest warrior shall receive as gift. But we're in disagreement of who shall get it. We believe your wisdom could judge us." Terizla said.
Philosophy don't work on Alice so Thamuz sought a different strategy; bribery.
"Choose me. I'll let you use the legion in a war however you see fit." Thamuz said.
"I can win wars myself." Alice replied.
Terizla step up next. She spoke no words but took off his clothes.
"Hah!" Alice scoffed. "Your muscles disgust me."
Then Argus walked past between the two. He pulled his sword and struck it on the earth.
"I vow upon this cursed sword. If you choose me, you shall have the most handsome boy alive." Argus said.
After Alice and his people got a curse, she spent her life serving the Abyss in Barren Lands. This land of despair offers no fair faces but deformed eyes, noses, or lips. So she wished for a change. She longed for a fair face that she could gaze at any time to ease her lonesome heart.
"Alright. Here's the apple."
Terizla and Thamuz, angered, gripped their weapons as hard as a steel. But a stare from Alice was enough to break their courage, forcing them to leave without another word.
"His name is Dyrroth, residing in Lumina City. With me as guide, claim him!" Argus said.
"Interesting." Alice replied.
Argus and Alice planned an assault to Moniyan Empire. Having been in the Moniyan Empire, Argus knew the roads and blocks of the capital. It took two weeks to prepare but at the time Alice and her demons attacked, they were fully prepared. Alice sneaked into Lumina City and kidnapped the young Dyrroth.
This event would spark hatred between humans and demons, marking the Abyss as a superpower that lead to many countless bloody wars. The victory of the Abyss would ignite fear and would shake the very foundation in all the corners of the Land of Dawn

Author's Note: "Thanks for reading! Let me write much more interesting and beautiful stories. Tell me your opinions, constructive criticism, and thoughts about this story. Comment which parts are funny, boring, and interesting. Finally, give me idea if this story became relatable in your life experience. Enjoy!

To my PHC readers, I love that you react in the story that I thought so hard to write. But please, I wish for you to comment your thoughts other than "thanks." Your comment, positive or negative, will be welcomed and it will inspire me to write more and improve even better. Long live the readers! Let's train our minds and imagination!

Elite
Thanks sa information
You must log in or register to reply here.