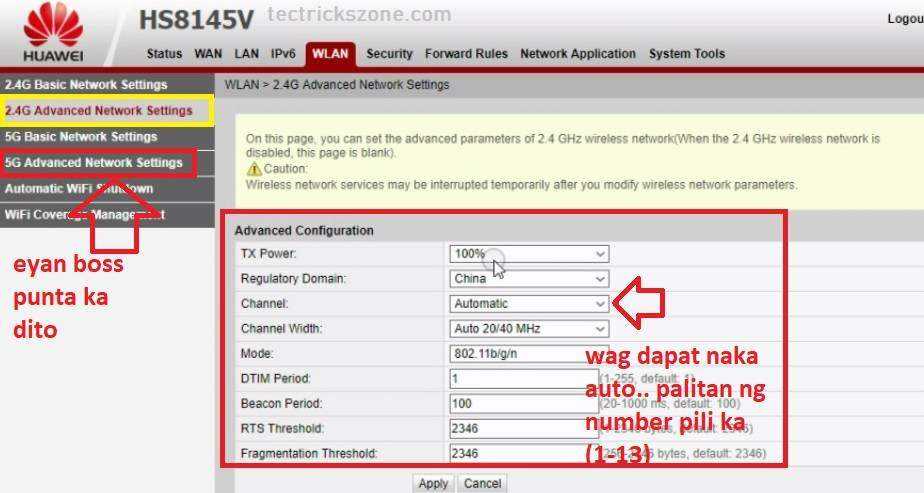 There is a total of fourteen channels defined for use by Wi-Fi installations and devices in the 2.4 GHz ISM band. Not all of the Wi-Fi channels are allowed in all countries: 11 are allowed by the FCC and used in what is often termed the North American domain, and 13 are allowed in Europe where channels have been defined by ETSI. The WLAN / Wi-Fi channels are spaced 5 MHz apart (with the exception of a 12 MHz spacing between the last two channels).

The 802.11 Wi-Fi standards specify a bandwidth of 22 MHz and channels are on a 5 MHz incremental step. Often nominal figures 0f 20 MHz are given for the Wi-Fi channels. The 20 / 22 MHz bandwidth and channel separation of 5 MHz means that adjacent channels overlap and signals on adjacent channels will interfere with each other.

The 22 MHz Wi-Fi channel bandwidth holds for all standards even though 802.11b Wireless LAN standard can run at variety of speeds: 1, 2, 5.5, or 11 Mbps and the newer 802.11g standard can run at speeds up to 54 Mbps. The differences occur in the RF modulation scheme used, but the WLAN channels are identical across all of the applicable 802.11 standards.

When using 802.11 to provide Wi-Fi networks and connectivity for offices, installing Wi-FI access points, or for any WLAN applications, it is necessary to ensure that parameters such as the channels are correctly set to ensure the required performance is achieved. On most Wi-Fi routers these days, this is set automatically, but for some larger applications it is necessary to set the channels manually, or at least under central control.

Wi-Fi routers often use two bands to provide dual band Wi-Fi, the 2.4GHz band is one of the primary bands and it is most commonly used with the 5GHz Wi-Fi band.

The table given below provides the frequencies for the total of fourteen 802.11 Wi-Fi channels that are available around the globe. Not all of these channels are available for Wi-Fi installations in all countries.

The channels used for WiFi are separated by 5 MHz in most cases but have a bandwidth of 22 MHz. As a result the Wi-Fi channels overlap and it can be seen that it is possible to find a maximum of three non-overlapping ones.

Therefore if there are adjacent pieces of WLAN equipment, for example in a Wi-Fi network consisting of multiple access points that need to work on non-interfering channels, there is only a possibility of three. There are five combinations of available non overlapping channels are given below:

As some energy spreads out further outside the nominal bandwidth, if only two channels are used, then the further away from each other the better the performance.

It is found that when interference exists, the throughput of the Wi-Fi installation is reduced. It therefore pays to reduce the levels of interference to improve the overall performance of the WLAN equipment.

With the use of IEEE 802.11n, there is the possibility of using signal bandwidths of either 20 MHz or 40 MHz. When 40 MHz bandwidth is used to gain the higher data throughput, this obviously reduces the number of channels that can be used.

The diagram above shows the 802.11n 40 MHz signals. These signals are designated with their equivalent centre channel numbers.

In view of the differences in spectrum allocations around the globe and different requirements for the regulatory authorities, not all the WLAN channels are available in every country. The table below provides a broad indication of the availability of the different Wi-Fi channels in different parts of the world.
�

This chart is only provides a general view, and there may be variations between different countries. For example some countries within the European zone Spain have restrictions on the Wi-Fi channels that may be used (France: channels 10 - 13 and Spain channels 10 and 11) use of Wi-Fi and do not allow many of the channels that might be thought to be available, although the position is always likely to change.

This band of frequencies is only allowed for use within the USA under a scheme known as 802.11y. Here high powered stations can be used for backhaul Wi-Fi links in data networks, etc.

Channels for these Wi-Fi network systems are detailed below.
�
Note: the channel centre frequency depends upon the bandwidth used. This accounts for the fact that the centre frequency for various channels is different if different signal bandwidths are used.

As the 2.4 GHz band becomes more crowded, many users are opting to use the 5 GHz ISM band for their wireless LANs, general Wi-Fi networks, home systems, etc. This not only provides more spectrum, but it is not as widely used for other appliances including items such as microwave ovens, etc. - microwave ovens work best around 2.4 GHz because of the absorption of the radiation by the food peaks around 2.4 GHz. Accordingly 5GHz Wi-Fi generally encounters less interference.

Many Wi-Fi routers provide the option for dual band Wi-Fi operation using this band and 2.4 GHz as do most smartphones and other Wi-Fi enabled electronic devices. Using frequencies in the 5GHz band generally provides faster Wi-Fi network speeds.

It will be seen that many of the 5 GHz Wi-Fi channels fall outside the accepted ISM unlicensed band and as a result various restrictions are placed on operation at these frequencies.
�
Note 1: there are additional regional variations for countries including Australia, Brazil, China, Israel, Korea, Singapore, South Africa, Turkey, etc. Additionally Japan has access to some channels below 5180 MHz.

C
Help HOW TO SET-UP PLDTFIBR?

Sep 22, 2020
P
6
Help STILL SUFFERING WITH THIS PROBLEM ON SOCKSHTTP